How much does Spotify pay per stream? Streaming payouts comparison [2022] 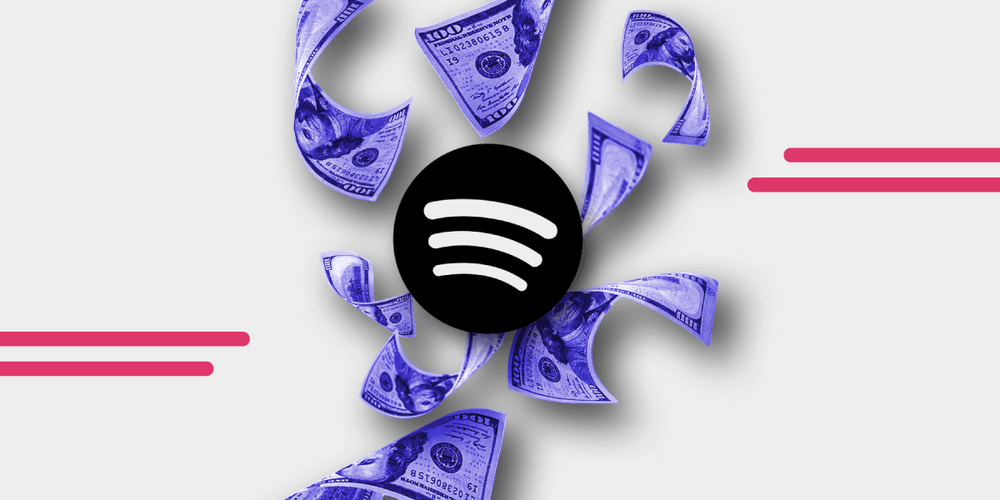 In the last decade, many platforms have emerged where you can listen to music, such as Spotify, Apple Music, Tidal, Deezer, YouTube Music, SoundCloud, or Pandora. Spotify is one of the most known in the music industry. Nowadays, many artists make money thanks to these music streaming platforms. Especially now that there are almost no live shows due to the pandemic, these streaming revenues are extra significant. But how much money does an artist actually make on Spotify streams? And how much does Spotify (or Tidal, Apple Music, etc.) pay per stream? Read further to find out.

Streaming platforms are at the center of the music industry. However, while promising local artists will earn not so much through streaming, an international superstar will make a million times as much.

Spotify is a digital music streaming service that provides access to millions of songs, podcasts, and videos from artists worldwide. So why do people love it so much?

Spotify is available in two versions: Spotify Free and Premium; the second option requires paying a monthly subscription fee. The free version has some advantages for its users because they can stream music at no cost. But to enjoy the full service, they need a Premium plan. And those Spotify Premium listeners bring more money per stream than Free tier listeners.

How much does Spotify pay per stream?

Let's get straight to the point: how much does an artist actually earn per stream? Well, that's not that easy to figure out. Spotify is very secretive about it.

However, it depends on many factors. For example, not every country pays the same amount. While listeners from the US pay $0.0039 per stream, Portuguese listeners will pay $0.0018.

In addition, Spotify doesn't pay artists royalties based on streaming rates. The royalty payments that artists receive may vary based on differences in the streaming of their music or the agreements they have with labels or distributors.

As we've already mentioned, Spotify Free and Spotify Premium handle music royalties differently. The first is free to use and shows ads to users. The Premium model has no ads but does ask for a monthly fee. Royalties are distributed from the net revenue collected from ads and Premium subscription fees. Spotify offers better royalties when Premium users stream music.

Less than a cent

With about a third of the streaming market share, Spotify pays on the average $0.004 per playback. Thus, it's necessary to reach 250 listeners to earn at least a dollar.

So you have to stream a lot to get something out of it. In addition, it doesn't mean that all the money goes to the artists. They often also have to divide the money: a record label or a manager often wants to earn some profits. So then there's not much left. There has been a lot of controversy regarding how much Spotify pays for royalties. 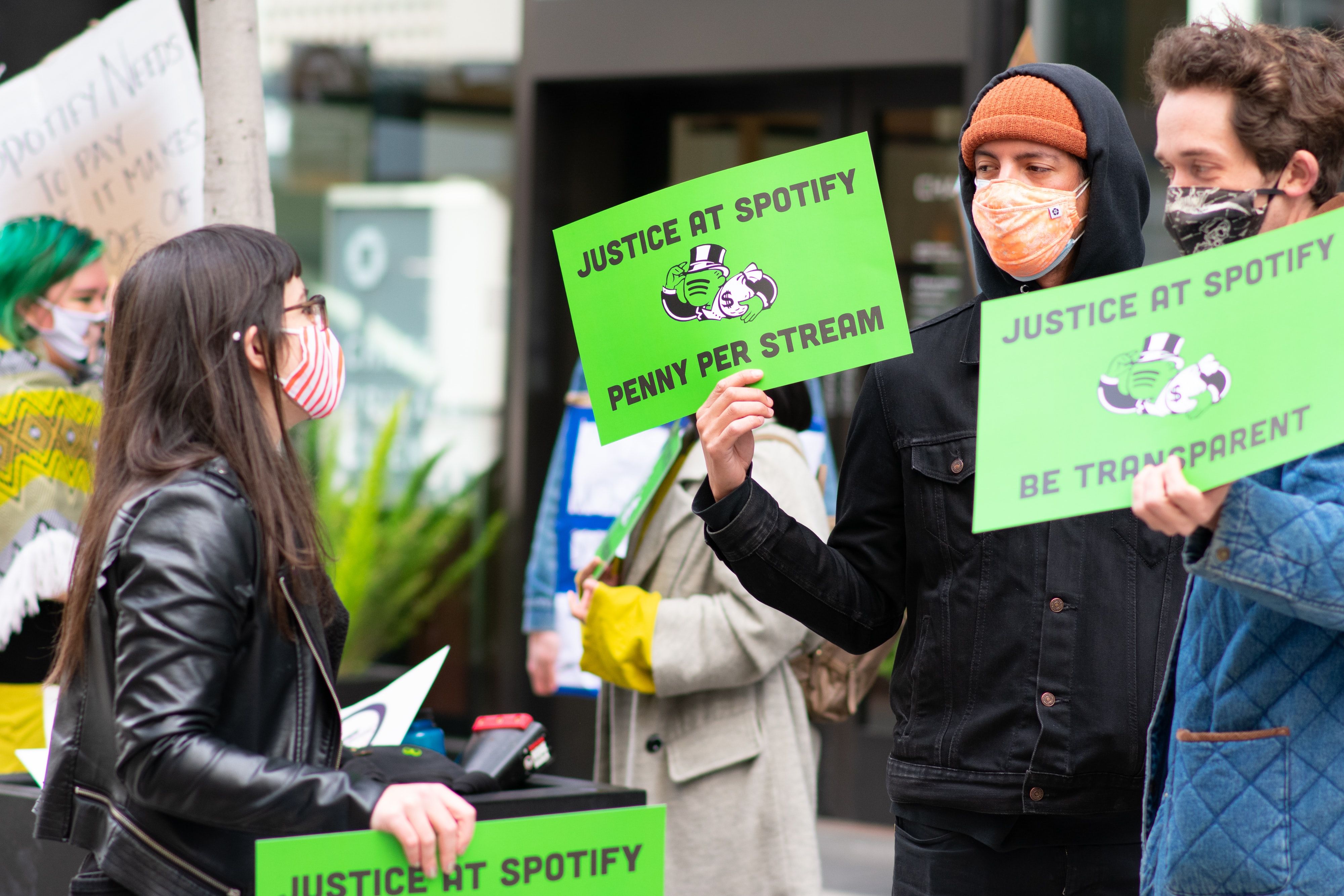 There are many factors to consider that affect the money an artist will receive from Spotify and such as where their listeners live, if they have a Premium account or what type of distribution contract the musician in question has.

How much does Spotify pay for copyright?

This is clearly visible when we look at the case of South Korea - a frontrunner when it comes to Pay Per Stream. Spotify pays as much as 0.017 per stream when South Koreans stream music. It's due to the fact that Spotify launched in South Korea without a free tier and only premium streaming is available. With this example, it becomes clear what immense influence the free plan has on the PPS.

With its enormous growth of active users, Spotify currently has around 75 million users worldwide, but approximately only 20 million have a Premium account.

Obviously, the growth of free users is much higher than that of paid users, which dilutes the royalty rate per stream for artists. The more users Spotify acquires, the lower the royalty rate per stream, unless the paid subscription percentage is maintained or increased compared to the free version. Rates are also influenced by the country (due to advertising purchases and the currency's value).

The price of paid subscriptions may also vary due to discounts and package offers.

Spotify pay per stream - 70 percent goes to the right holders 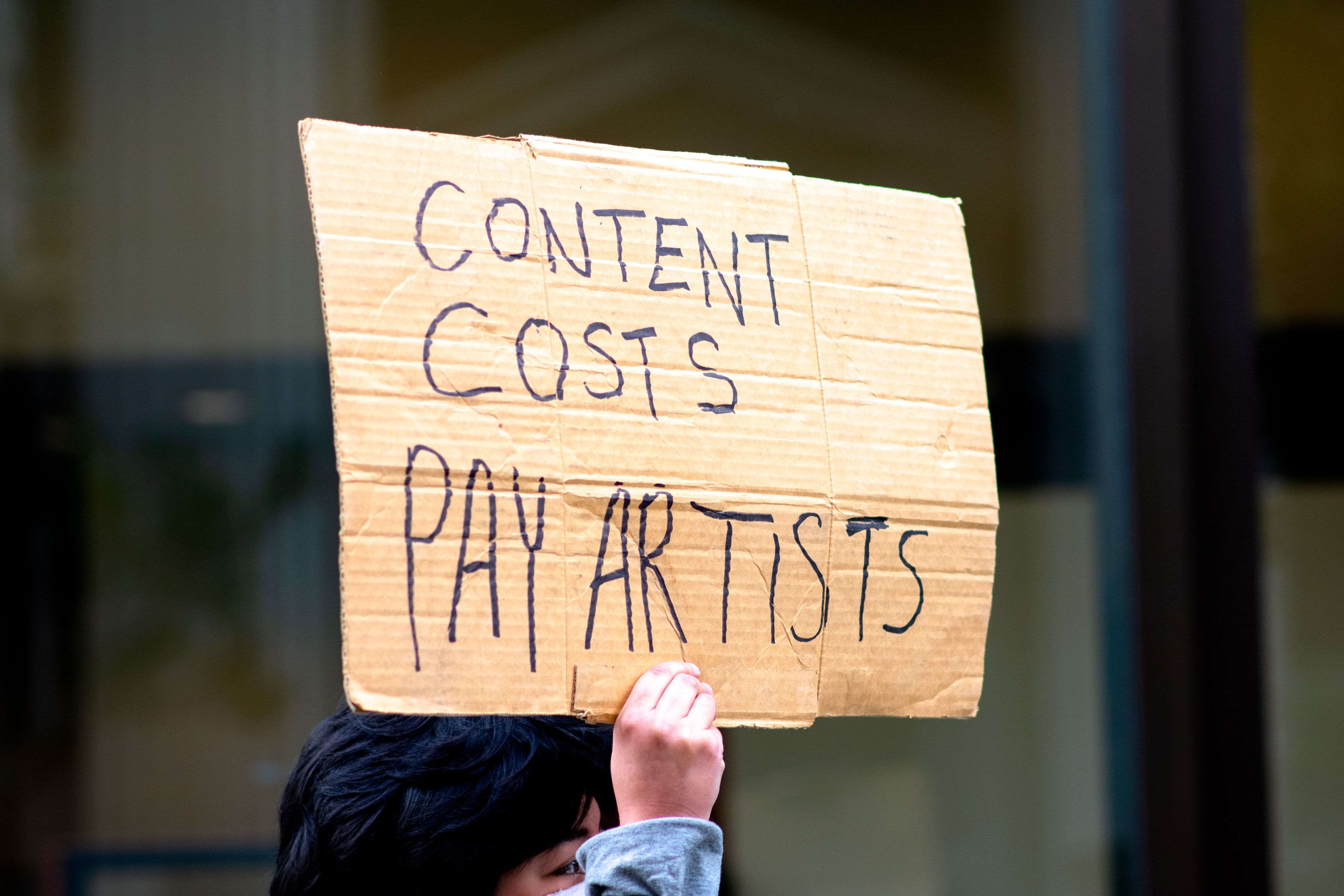 Many artists and music makers aren't happy with Spotify's system. Of all the money Spotify receives, 70 percent goes to the right holders. That money also comes from your Spotify premium subscription.

“Spotify pays royalties for all of the listening that occurs on our service by distributing nearly 70% of all the revenues that we receive back to rights holders. By ‘rights holders,’ we are referring to the owners of the music that is on Spotify: labels, publishers, distributors, and, through certain digital distributors, independent artists themselves.”

So most of your money will go to the record label, then the distributor, and at the very end, the artist.

But not necessarily the one you've been listening nonstop for the past month.

The system also concerns the share of one artist within all those streams. Spotify takes all of the money generated from users and divides it by the total share of streams each artist received. ⁠So let's say Drake is responsible for five percent of all streams, then five percent of all money has to go to Drake.

Of course, that's okay if you enjoy listening to Drake. But what if you never do? Then it's actually a bit weird since your money goes to Drake while you never listen to his music. That's why some artists think that your subscription money should go to the artists you actually stream. And not that everything is lumped together and then distributed.

Music streams - which streaming service pays artists the most?

Do you want to know how much do artists make per stream?

Below we presented a chart where you can see how much music streaming services pay per stream.

How many streams does it take to make money with Spotify or other platforms? Well, you can figure it out looking at the table below (or using this Spotify calculator).

These are the number of streams that musicians need to obtain to earn $1 or $1000.

Can an artist make a living from Spotify streams?

Spotify doesn't want to say what exactly artists earn because it depends on many factors. However, according to simple calculations, artists have to have millions of streams to live from their music.

For example, according to our chart, as an artist, you'll earn:

Increase how much you earn per stream

Artists should be present on as many platforms as they can to reach new listeners and increase their streams. Spotify might be the most popular streaming service but millions of people use other music apps.

Another way to boost your streams are playlists.⁠ Thousands of artists ignore playlists, which is a huge mistake: after all, this is the main way fans consume music on streaming services. Pitch your song to playlist curators or create your own playlists, with artists that are similar to your sound. We shared some tips for getting on playlists and pitching your music here. This proves to be one of the most effective ways to increase your streams organically. If you want to learn more about music marketing, get yourself familiar with music marketing strategies for 2022.

You should focus on building fan community and Spotify should be treated only as means to an end. Most artists make more money through live shows, merchandise, endorsements, features, social media, sync licensing, and so on. To build fan community, use Smart Links so that your listeners can follow you on the music platform of their choice. This tool is also great for promoting playlists across every streaming service.

Apple Music was released by Apple Inc. in 2015 and is the first service from Apple that also works on Android. Apple Music currently has about 60 million users, which is still much less than its major competitor Spotify. So would Apple pay the artists more to increase competition? Yes, Apple certainly does this. The artist only needs 136 streams to earn $1.

On the other hand, an artist with Spotify only earns this at 229 streams. It may seem like a slight difference, but if an artist reaches a million streams on both platforms, this saves $1,000, a pretty hefty amount.

YouTube was founded on February 15, 2005, by Chad Hurley, Steve Chen, and Jawed Karim and since then, as many know, is a successful platform. YouTube is one of the top 3 most visited websites in the world, and about 300,000 new videos are posted every day. It provides a genuine opportunity for artists to release their video clips. But what does such a video clip on YouTube actually earn? An artist makes about $1750 with a video clip that is viewed a million times. That amount is, therefore a lot less than that of Spotify and Apple Music.

Tidal and Napster pay the best

The most generous streaming platform is Napster. The online music store pays the artist $1 for every 53 streams, followed by Tidal. Created by Jay-Z, Tidal pays $1 for all 80 streams. Then there is Apple Music (136 streams), Deezer (156 streams), Spotify (229 streams), and Amazon Music (249 streams). Far behind, YouTube Music stands out as the most "stingy" platform since to collect just $1, you have to generate no less than 570 streams.

If it's important for you to support artists, you can start using Napster or TIDAL instead of another music streaming platform. Don't worry about your playlists, you can quickly transfer them using the FreeYourMusic app!

On November 17, TIDAL announced the fan-powered royalties, thanks to which artists can benefit directly from their fans and subscribers. This money-making system is far more transparent for musicians than royalties options offered by other music streaming services.

TIDAL will be the first streaming service to pay artists with the money of subscribers who have actually listened to the artist. Other major music services such as Spotify and Apple Music now aggregate their users' money and give most of it to the artists with the greatest success. As a user, you actually pay musicians you never listened to. Many unions and artists have been criticizing this system for years. It favors stars and leaves little for the smaller musicians.

That is why TIDAL is launched the fan-powered royalties system. In this model, the user pays only the artists to whom he or she listens. This will start in January 2022. "TIDAL is supporting artists with fairer earning terms and quicker payments, and fans are getting a better way to support their favorite artists" said Jesse Dorogusker, Head of TIDAL. What's interesting, fans will be able to see seehow much their favorite artists are making from their streams in their activity feed. 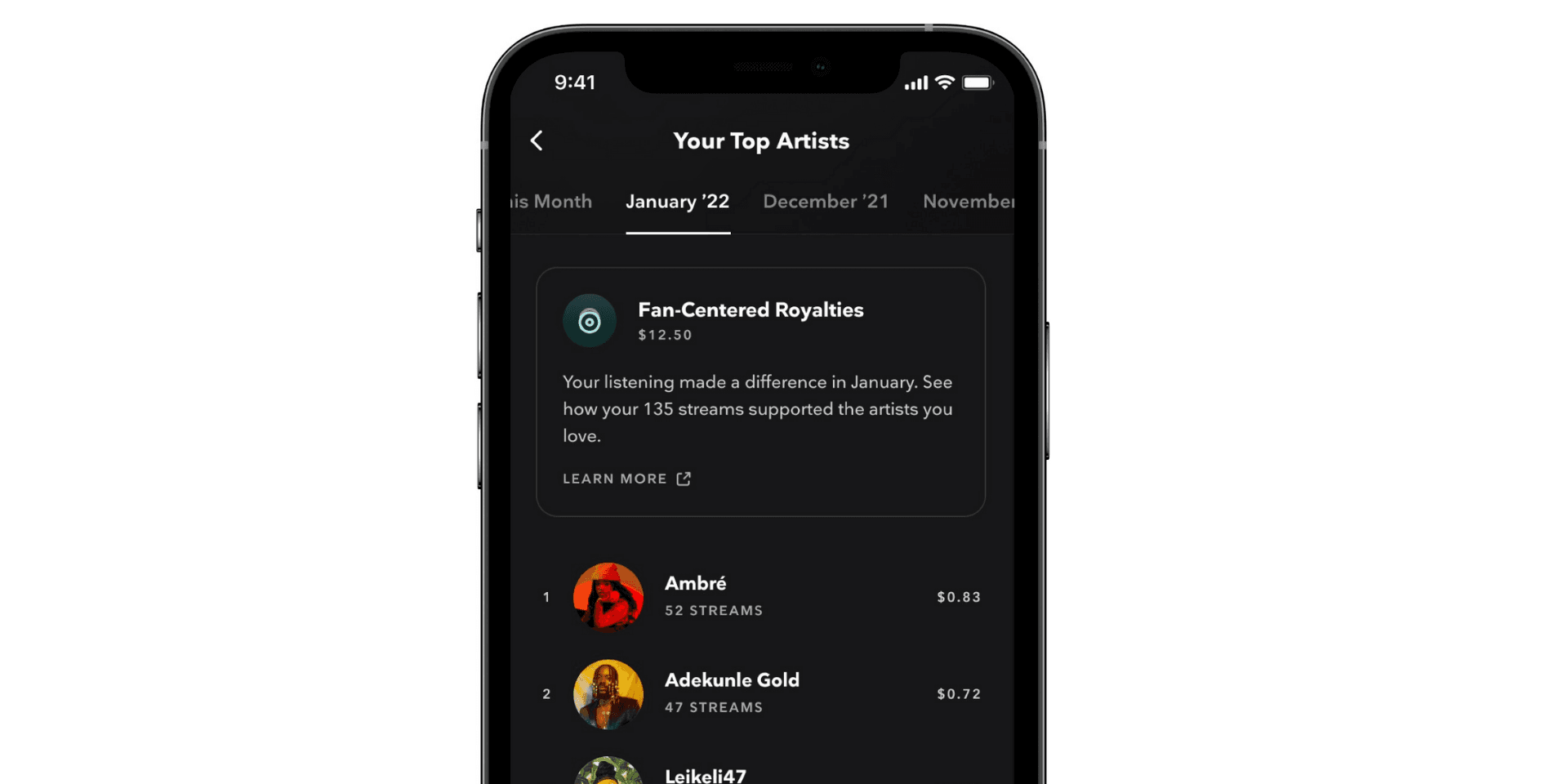 TIDAL also introduced direct-to-artist payments which means that 10% of a user's Hi-Fi subscription (priced at $9.99) will be directed towards their TOP streamed artist of the month. This innovative earning program is additional to their streaming royalties. 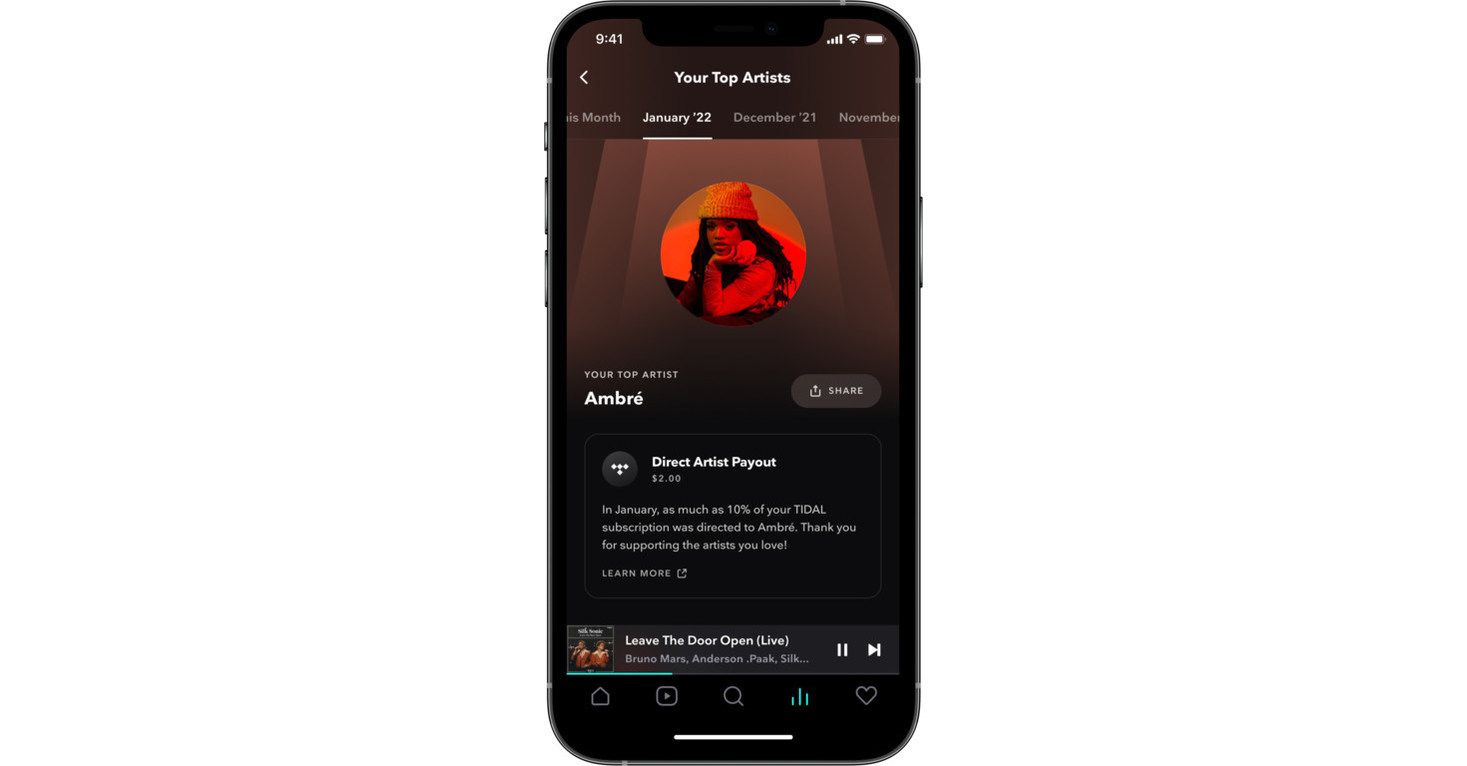 If you'd like to support the artists you actually listen to with your paid subscription, TIDAL may be your go-to streaming service. They just introduced a free tier and their Hi-Fi option costs only $9.99 (same price as Spotify but way better sound quality!). If you want a more detailed comparison, you can read our TIDAL vs Spotify review. And when you decide to switch, don't forget to transfer your playlists with FreeYourMusic 😉 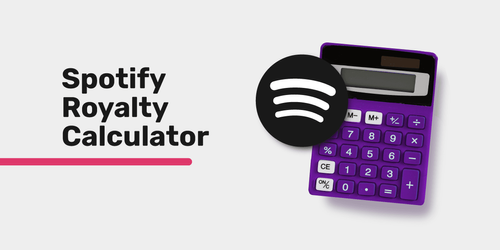 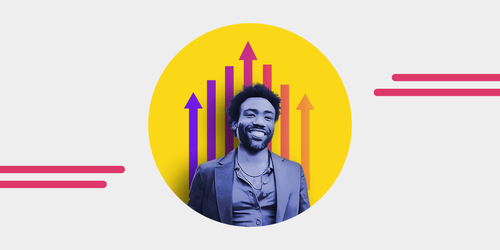 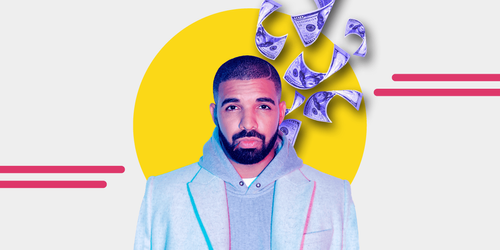 What is Drake's Net Worth? How do artists make money?