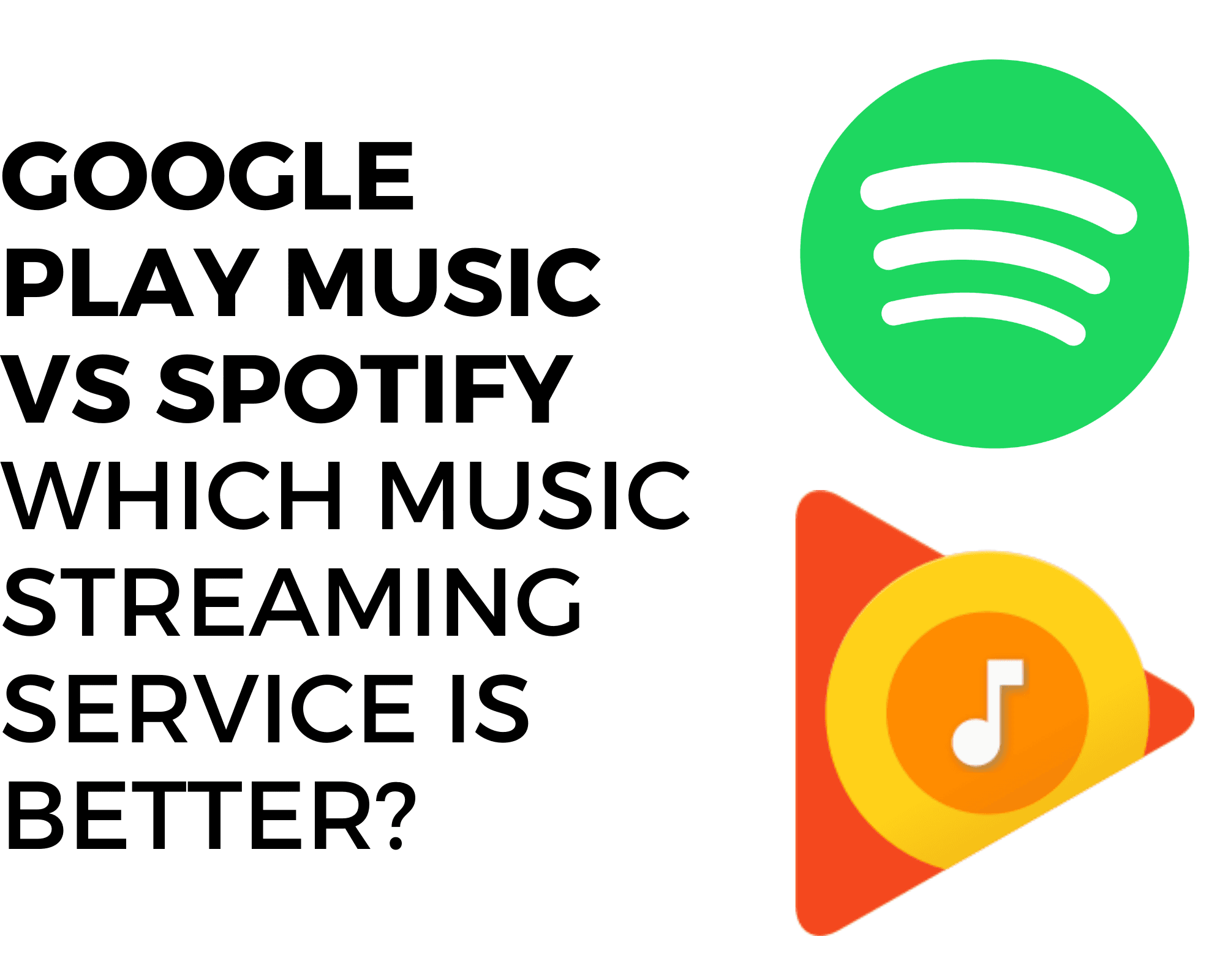 It’s time to make another comparison of on-demand music streaming services. Are you ready? Let’s decide which platform is better - Google Play Music or Spotify. 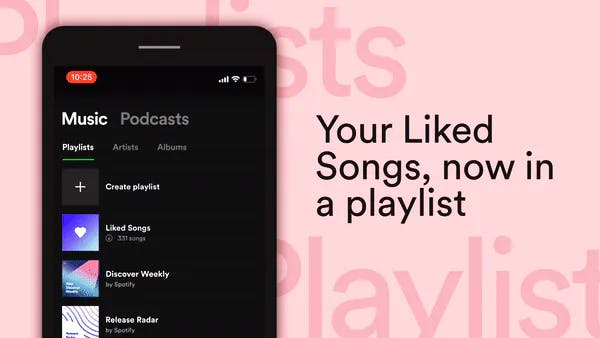 We are slowly forgetting about radio, cassette tapes or CDs. We’re living in a time of the internet so also music has adopted some features which allows us to listen to any song of any artist wherever we want. To do this we need access to music streaming services such as Google Play Music or Spotify, and no, we don’t need an internet connection. You may ask: “But how I don’t need the internet to listen to the music on my phone when I’m going to work?”. Let us explain it, but first let’s discuss some basics about Spotify and Google Play Music.

Spotify is a Swedish music streaming service founded in 2006. At this moment it’s one of the biggest platforms with 286 million users and 130 million Spotify Premium subscribers. It gives you access not only to over 40 million of songs but also podcasts and playlists. Spotify offers a well-designed app with a friendly-to-use interface and easy navigation. It’s a really good choice for all music lovers who don’t want to be stuck with only one music genre and are ready to discover more amazing music.

What is Google Play Music?

Google Play Music is a much younger music streaming music service than Spotify. It was created in 2011 by Google as a place to listen to music and podcasts. Users of Google Play Music can choose between 40 million songs available in the library. We can be sure that the application is stable because… come on, it was created by Google! And they perfectly know how to develop its services.

Or maybe you’re already a user of one of these platforms and you want to switch to another one? Let’s find out on our blog how to easily transfer all your playlists from Google Play Music to Spotify and vice versa.

Now when we know what we are dealing about we can move to more details and features of Google Play Music and Spotify. We’re going to cover everything in detail in this article, but if you don’t have time to read it from the top to the bottom there’s a Google Play Music vs Spotify comparison chart we’ve prepared. 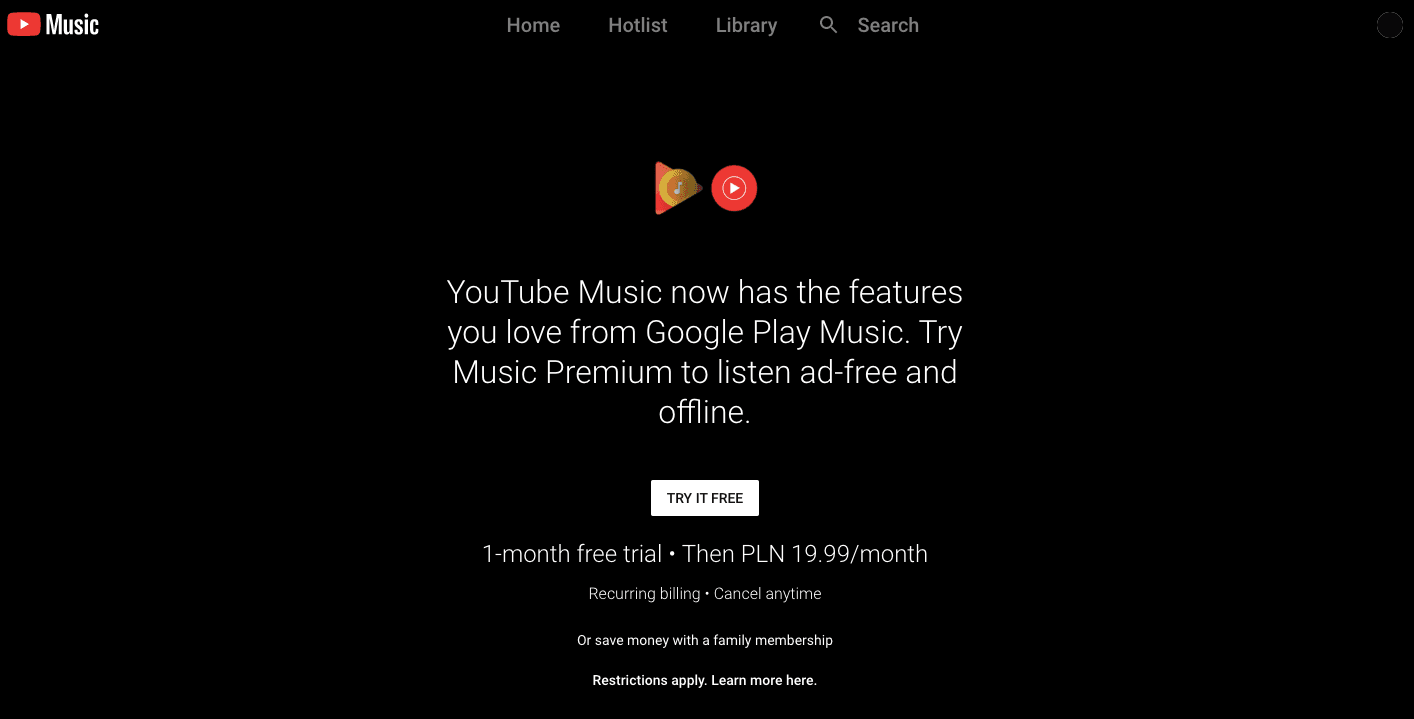 Money, money, money. You can listen to Google Play Music for free if you’re a YouTube Premium subscriber, but if not you can always take advantage of free 30-days free trial. After this period, the price is $9.99 per month for individual users and $14.99 per month for users in a family plan. The family plan subscription gives you access to the same options such as an individual membership, but up to six people can use the same account.

Prices of Spotify are the same with a one difference because if you’re a student you can get a special offer from Spotify which gives you a discount. Instead of paying $9.99 per month as an individual user, you have a budget-friendly option and then Spotify costs only $4.99 per month. Sounds great, isn’t it? If you want to know more about the pricing of other music streaming services, learn here how much is Apple Music, for example...

Point for Spotify because they do not forget about the students which are huge music fans.

Is Google Play Music Free? Can I listen to Spotify for free? Let’s find out.

If the prices we’ve mentioned before are still too high for you and you’re looking for free music, there’s an option for you.

First of all, Spotify offers a free three-month trial which is enough time to discover the application and listen to music in the same way the Spotify users do. When the free trial ends it does not mean that you don’t have access to music anymore. You can still listen to music with some limitations such as shuffle playing and ads between songs. The fact that you can’t pick the exact song you want to listen may be frustrating but you still have access to the service.

The trial period in Google Play Music is much shorter because it lasts only 30 days. When the testing period ends everything you’re left with is an ad-supported radio which is not the best option because we don’t like to be forced to listen to the music we don’t want to. We want to have a choice which radio doesn’t provide it to us. In this situation we can move to YouTube which is also supported by by Google.

Another point to Spotify. Maybe Google Play Music will be lucky in the next category which is a music library.

How many songs are on Google Play Music and Spotify?

In fact, Spotify also as well as Google Play Music gives us access to a huge music library. Both platforms can be proud of over 40 million songs and podcasts. Google Play Music, just like Spotify offers us new music and classic hits that everyone loves in very high sound quality. Another great feature of those streaming apps is the fact that you can also upload your own music to a library.

In the case of Spotify the library limit is 10 000 songs and Google Play Music, which is very surprising, allows you to upload even 50 000 songs! It’s very impressive and we have to underline that Google Plays Music creates a very good environment with YouTube, so you can easily move between those two services.

The amount of uploaded music by you which is up to 100 000 songs is a really good option for music lovers who were creating their music libraries on computer since ages and they don’t want to lose it. We give a point to Google Play Music.

Is Music Quality on Spotify Better than on Google Play Music?

It’s always really hard to talk about audio quality because with today’s technology the quality of the sound is generally very good but you have to remember that there are many aspects that could make it worse such as your internet connection or paraments of your device. But we have specific data from Google Play Music and Spotify so let’s take a look. In both cases the quality of the sound is 320 kbit/s. Don’t worry if you don’t understand what it means. All you need to know that this is a really good quality of music… unless you’re an audiophile :)

Of course, the higher the music quality is the more data your device will download. But trust us, 320 kbits/s will give you a nice and smooth sound no matter if you are using headphones or speakers.

Another point for Spotify and Google Play Music. 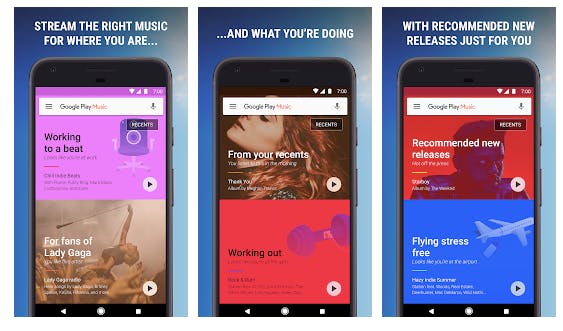 Probably everyone was using in their life Google App or website. So using Google Play Music will be easy because the app is designed with all Google standards and color palette. A huge feature of the mobile app is an intuitive navigation, so it’s very hard to get lost in the app. We have to say that using this mobile application is also a very fun experience because we can discover cool options which will help you to better manage your music libraries and playlists. We really like it!

In many new Android devices you won’t find a Google Play Music app installed. This app was replaced by YouTube Music which is quite similar. YouTube Music is like YouTube in terms of music. No ads and the ability to turn off the screen without interrupting playback which we’re missing in the standard YouTube app.

We can say the same about the Spotify interface and design of mobile app with only one remark, everything is in dark colors. But this dark color is not that overwhelming and heavy as it was in case of Amazon Unlimited Music which we’ve written in this post. In fact the Spotify app is more developed and it has more options, but Spotify has more experience and is a bit older than its competitor so it’s quite logical.

We can’t decide who is winner in this category so we’re going to give a point to Spotify and Google Play Music once again.

After counting all the points the winner is only one and it’s Spotify. Probably you’re not surprised by this because Spotify is the biggest player in the streaming service game so it’s really hard to beat it. But we understand that not everyone must be a fan of this Swedish company, so we can recommend Google Play Music as a great alternative to all music lovers.

Which one of the music streaming services do you want to see a comparison next time? Let us know!